Engaging for the Future 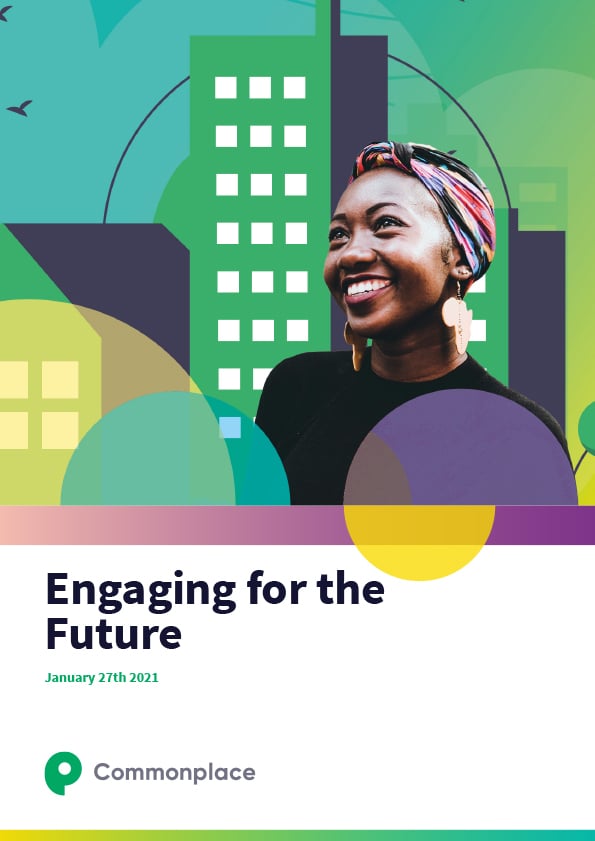 What are the barriers preventing people from engaging in planning? How do people want to participate? What does good and effective engagement look like?

In this free 40-page eBook, you'll find the answers to all of these questions. We present the findings of our nation public opinion polling, qualitative research and data collected across over 1,000 planning engagements on the Commonplace platform.

It includes best practices for community involvement and key principles that will help you achieve meaningful, ongoing engagement with local people.

Download the guide now, or read below for more info

In this guide you'll find:

Want to read the full report?

Commonplace is a leading digital engagement platform that connects people to places. We help bring together those shaping the built environment with the people who use, love and enjoy them. This report brings together our own insights from data generated from our work with over 200 customers and 1,000 projects from across the UK, together with new opinion polling and sentiment from focus groups with the public.

Public First ran a nationally representative online poll of 1,003 UK adults between the 6th and 12th October 2020. Results are weighted by interlocking age and gender, region and social grade. Public First is a member of the British Polling Council and abides by its rules. Two focus groups were conducted in south Middlesbrough on 14 October 2020.

This report has been written in response to the Government’s 'Planning for the Future' white paper and focuses specifically on the issue of engagement – what we mean by engagement, what constitutes good and effective engagement, how it is best done and what the enormous rewards of successful engagement are.

Our concern is that without careful understanding of the mechanics of online engagement, the Government’s impressive ambition for greater engagement in plan-making could inadvertently fail. Proposal 8 of the white paper is ‘a streamlined, more engaging plan-making process’. It sets out steps to speed up the decision-making process in which it says;

“We propose that the process covers five stages, with meaningful public engagement at two stages.”
- Planning for the future.

In this report we aim to outline and highlight through our experience and research, that continual and meaningful engagement really matters for all stakeholders. It removes the conflict that can alienate local people. It results in better decisions made more swiftly and with fewer obstacles since most of the problems are resolved much earlier in the process. It fosters long-term trusted relationships between residents, planning authorities and developers.

It also matters to a national Government that wants to revitalise, rebuild and re-imagine those communities most in need of regenerating – the so-called ‘levelling-up’ agenda. Engagement is vital to ensure that those people who feel so connected to their local communities and who have such enormous civic pride in the places where they live also feel ownership over the future of their cities, towns and villages.

We hope that this report makes the case that such engagement is only really successful when it is done early on in the process and continues throughout – from strategic principles to final build and use of a development.We are concerned that the proposed reforms do not quite deliver this at the moment.

1. Successful engagement is a conversation, not a survey

Commonplace data collected over seven years, and from 2.5M people and over 1,000 projects, has clearly demonstrated the value of ongoing engagement in planning to increase involvement and build trust: our data shows that people who have previously engaged in a consultation by reading or interacting are five times more likely to participate themselves by adding a comment.

To better understand the reasons behind this, we commissioned a national-wide survey of 1,000 people and conducted focus groups in Middlesbrough.

2. There is a large appetite for long term involvement in planning

The results of our survey demonstrated that the public want to be continually involved in how planning affects them: 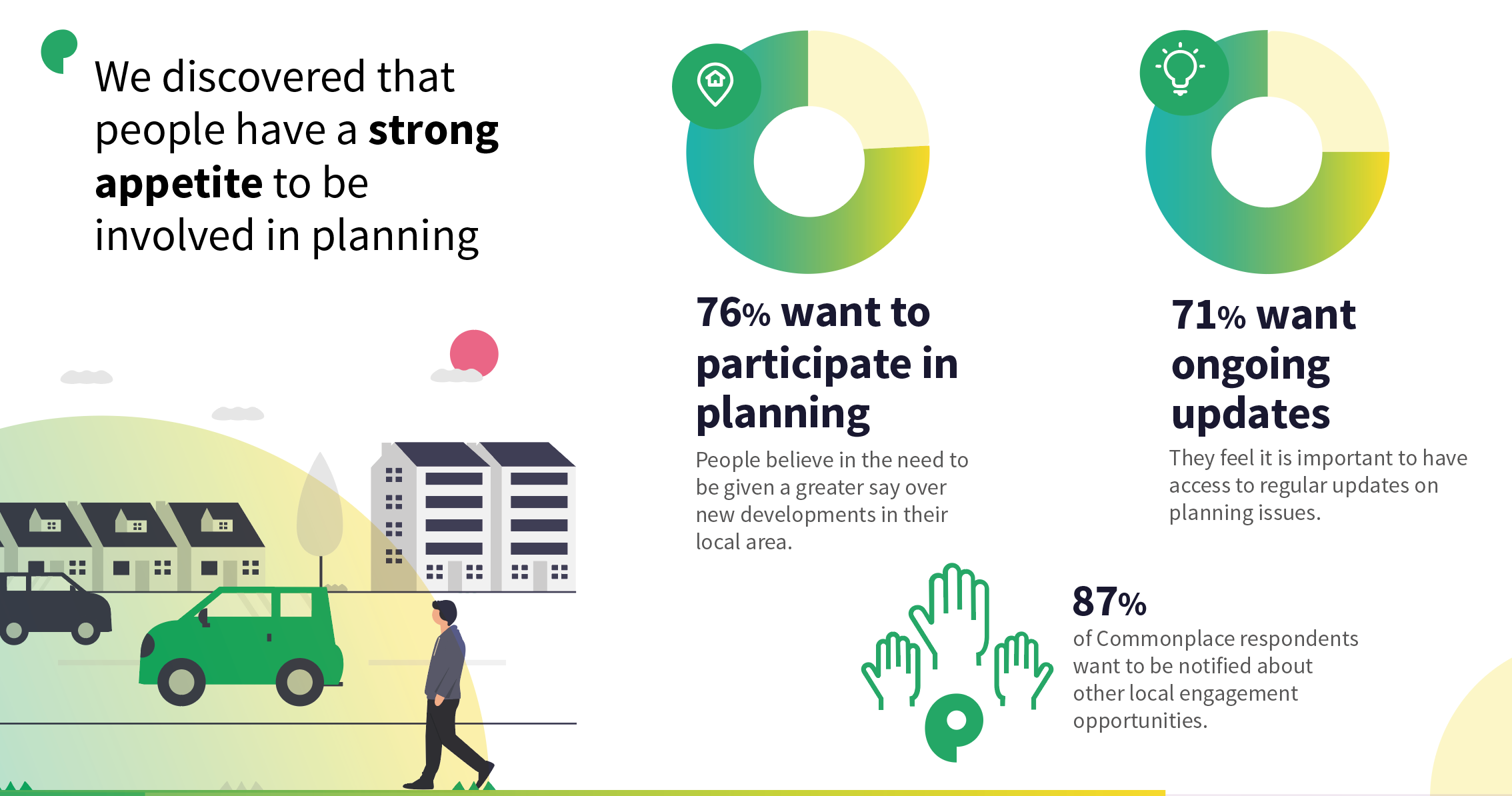 3. There is also a demand for more strategic input.

The research indicated that people feel ill-informed and want to have influence earlier in the planning process. On the questions:

4. We found several important barriers to public engagement with planning.

These go some way to explaining why Grosvenor ground that only 7% of people trust local government to make decisions the best interests of their area, and only 2% trust developers to act in an honest way in planning for development:

5. Data shows how barriers can be overcome through open and ongoing engagement 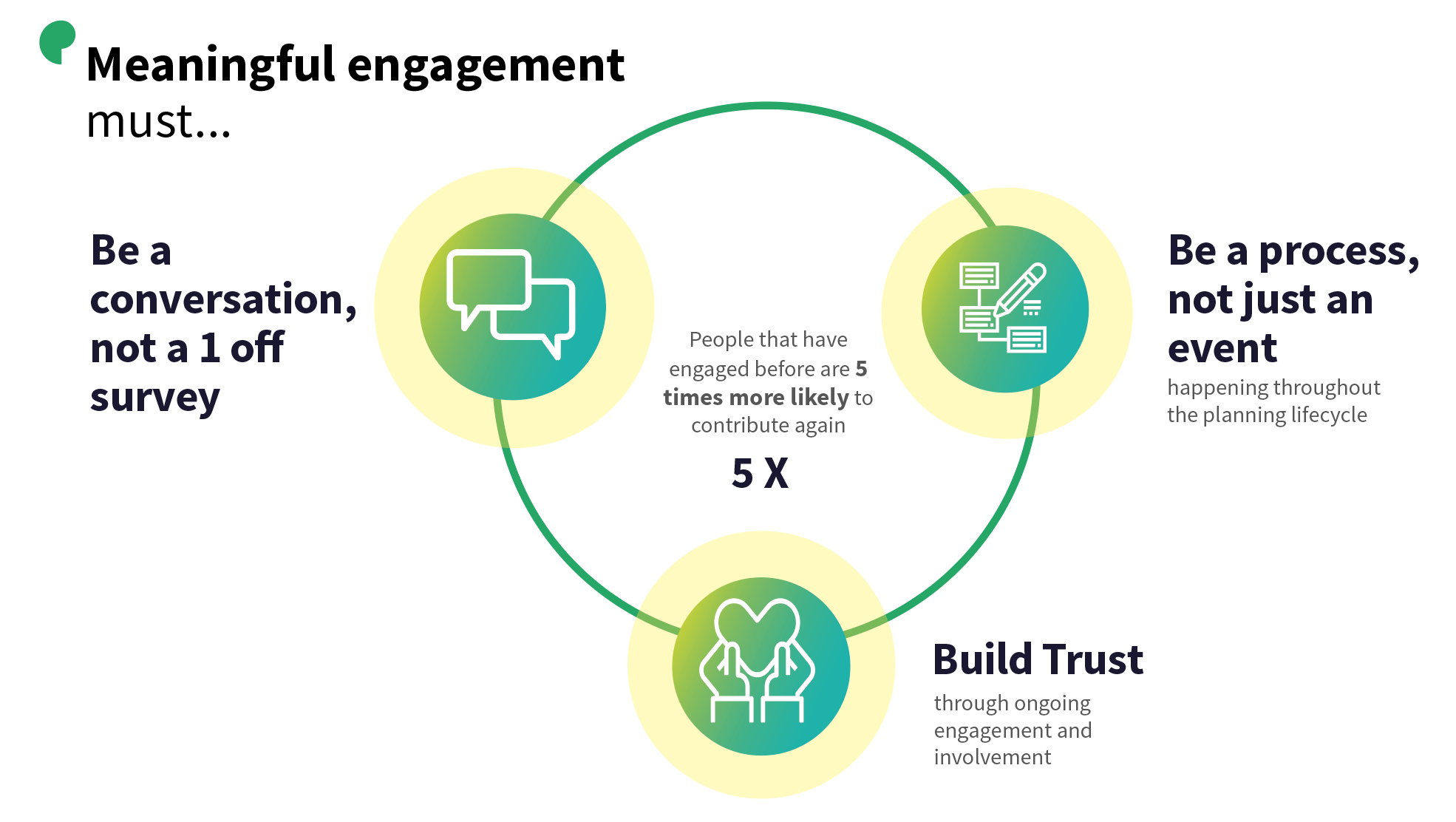 Want to learn more? Download the full report at the top of the page.

Discover the platform with one of our community engagement experts.