The small East Yorkshire town of Driffield is home to just over 13,000 citizens. Of this number, more than 50% of the population is over the age of 45 and 30% of the population are retired citizens. East Riding of Yorkshire council has successfully used a digital-first, blended approach to crowdsource ideas for the rejuvenation of its town centre. See the regeneration engagement website here.

In 2019, East Riding of Yorkshire Council (ERYC) joined forces with the then York, North Yorkshire & East Riding Local Enterprise Partnership to assess the economic wellbeing of town centres in the region. Challenges facing the high street were exacerbated further as a consequence of the devastating global pandemic. Many towns, districts and cities invested in creating robust recovery plans, and ERYC selected Commonplace to power the conversations necessary to get the feedback that would ensure sustainable prosperity for this town post COVID-19.

Town centres have historically been the hub of economic activity, but more than this, a region’s social and cultural identity can be formed here, particularly for smaller towns and cities. The identity of local people is closely bound with where they live and places that have been local hubs for centuries. Involving local communities in shaping Driffield and centres like it is essential for balancing change and continuity.

For this reason, ERYC conducted an initial stakeholder engagement in 2020 with Driffield Town Council, members of the public and local businesses to form a plan. Once the plan was made, the Town Council and ERYC wanted to have a “broader conversation” with a wider audience. Starting in May 2021, ERYC used Commonplace to ‘temperature-test’ the plan, launching a multi-dimensional consultation lasting seven months. The Commonplace engagement gathered over 2,200 contributions on changes to the main green public spaces, the Market Place Plaza, active travel, and the hospitality and entertainment offer. The Commonplace website has had over 6,000 unique visitors, 60% of whom read parts of the site or contributed. That is equivalent to 27% of the local population - a remarkable level of reach and of civic interest.

I definitely feel like we have [reached the main objectives we had for this consultation], some of the projects coming up now and the work that the town council are doing have been massively influenced by what we’ve learned from the community through commonplace. - Natalie Leeming, Local Growth Coordinator, East Riding of Yorkshire Council

ERYC and the Town Council wanted aspired to nurture a two-way conversation with Driffield residents and recognised Commonplace’s ability to do this, both online and offline. Alongside launching a community heatmap and design feedback pages on their engagement site, ERYC made great use of Commonplace’s ‘Survey Mode’, which enables our customers to take the engagement to the people in the streets. Members of the local authority approached residents with a tablet device, or a paper form and clipboard, to help them add their contributions.  This way, ERYC has been able to use multiple channels to reach its residents, while capturing all the data consistently and in a single database.

When conducting face-to-face canvassing in the town centre, staff members of ERYC were often pleasantly surprised to be met with the response “we’ve already contributed online”. To accomplish this level of local awareness, a range of promotional methods were used: social media, posters with QR codes on empty shop fronts and posters fastened to railings.  All of this contributed to the 6,025 visitors reaching the engagement site, 57% of whom took the time to read through the proposals at the very least and 2,294 left a contribution - 16% of the local population.

The digital-first, hybrid approach was met with positive feedback by the local people, and many of them appreciated the combination of face-to-face with a digital, visual component.

In selecting Commonplace, ERYC went through a formal procurement exercise, showing Commonplace to be the top-scoring platform. Here is what impressed ERYC:

The Visual layout and mapping function

The 2020 government white paper “Planning for the Future” argued that planning needed to be more accessible to the public and the way to achieve this included being more digital and more visual. Nick Russell, Local Growth Programme Manager at ERYC, identified the unmatched potential the Commonplace platform had to meet this need effectively, alongside the specific needs of the Driffield engagement project.

Typically, the ERYC internal process means that once the surveys are launched, there is a limited ability to monitor progress in real time and be agile in adapting the consultation mid-course. Commonplace allowed the ERYC project team the freedom to monitor, adapt and extend the project’s lifespan, to capture some last-minute additional feedback.  ERYC recognised how the Commonplace platform shortened the process and enabled them to react quickly to the requests of other stakeholders, such as Driffield Town Council.

The provision of dedicated expertise and support

This engagement was the first of its kind for ERYC. As a result, they recognised their need for greater access to support. The initial training supplied and supplementary ‘how to’ videos to refer back to, meant the ERYC project team felt well equipped every step of the way. Additionally, their dedicated Customer Success Manager was on hand to respond to any queries.

The training that we’ve received has been really good. If there was anything we needed to ask, the team were there throughout, constantly answering questions. The team has been great all the way through the journey to date. Natalie Leeming, Local Growth Coordinator, East Riding of Yorkshire Council

The ability to have an open, ongoing conversation

One thing that was noted was the appreciation the local people had for being kept in the loop. The Commonplace news function meant that this was not just another survey the local people would fill in only to receive no feedback. Using this aspect of the platform meant the community were left reassured that their feedback had been heard and was being acted upon. In all, 10 News items were sent out - an average of one every three weeks or so. The number of news subscribers grew with every News edition, and stands close to 800. This also helped to build trust and familiarity and when the final round of engagement was launched, yielding 524 responses in the three weeks following the launch.

What’s been nice has been how interest has built every time we’ve put a survey out through the platform, how the engagement and the number of people who have then signed up has slowly grown, not stagnated. It’s great to know that people are interested in what we’re talking about and we hope to build on this. - Nick Russell, Local Growth Programme Manager, East Riding of Yorkshire Council

What East Riding learned from the community

With 2,294 contributions added to the platform and 768 subscribers, ERYC are happy with the traction this digital-first approach has garnered. A quarter of the visitors to the website contributed to the consultation; roughly 37% of those contributing were aged 45 years and above. This shows that a digital-first, hybrid approach can also be effective among an older demographic.

Below is an infographic ERYC shared on their project page, and with those subscribed to updates. 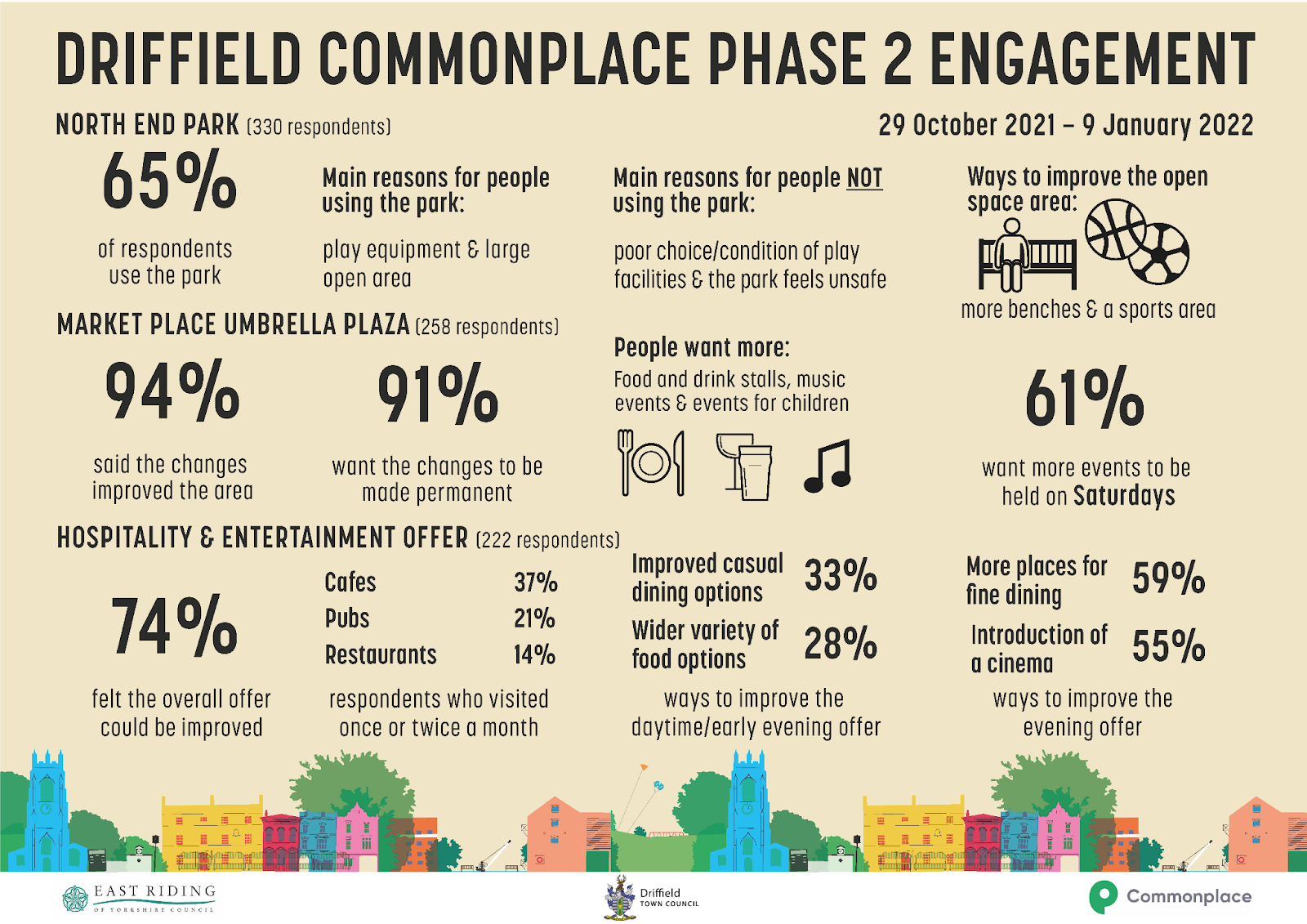 The engagement provided the ERYC project team with the evidence base to prioritise and better define the changes to be made based on the local sentiment and general feedback.

I think Commonplace has really supported identifying the major issues the town centre was facing. A  lot of the time we struggle to gather the evidence we need to secure funding, but   this platform has been brilliant to gather that evidence.- Natalie Leeming, Local Growth Coordinator, East Riding of Yorkshire Council

On 9th March, East Riding will close the final round of consultations on North End Park and will set about planning the delivery of the proposed changes to this public space, informed by the community engagement.

Following the success of the Driffield town centre engagement, East Riding of Yorkshire Council has opted to utilise the Commonplace platform for the county’s Climate Crisis engagements. If you’re from this region don’t miss out on your opportunity to help tackle climate change.

Learn more about how Commonplace can help you gather the data for your regeneration projects!