Waltham Forest secured £20m of investment  to develop 'Mini-Holland' - a programme to help radically improve cycle routes and public spaces across the borough. Using Commonplace, they were able to to understand the active travel needs of people in the area and plan the most effective interventions.

The aim of the 'Mini Holland' project was to get more people in Waltham Forest walking and cycling. To do this, they needed to engage with not just the residents, but anyone that used the streets of the borough and therefore likely to be affected by the project.

What is 'Mini Holland'?

The Mini Holland scheme is part of the Mayor of London's Healthy Streets Approach, aimed specifically at outer London boroughs where residents are more car-dependent than inner London. The ambition is to make these boroughs as walking and cycle friendly as their Dutch equivalents, where more than 50% of journeys are considered 'Active Travel' in some cities.

The benefit? By promoting active travel in these areas, communities will benefit from better health, reduced congestion and enjoy more pleasant spaces.

One of the key problems with many Transport Planning projects is that the planning process is lengthy and complex, and local communities often feel left out of the process. To ensure the right interventions are made, and that people will actually use the new infrastructure, Waltham Forest were keen to engage with people, early on in the planning process.

The scheme was paving the way for big changes in the public realm including traffic calming; blocking rat runs; improving conditions for walking and cycling - all of which require large-scale consensus-building.

Given the scale of these changes, Waltham Forest faced initial opposition, particularly from drivers and lobbyist groups. There were protests outside the town hall and a 6,000 signature petition signed by local residents. Therefore, one core area of engagement was around showcasing the benefits of the scheme and its positive implications for travel, fitness and lifestyle in the area.

See how Commonplace can help you with your active travel planning

Waltham Forest ran initial surveys that brought up interesting insights into what people would need to improve the area. By canvassing the opinion of both businesses and visitors over 15,000 comments were submitted that allowed assumptions to be spotted and challenged. For example, whilst over half (57%) of businesses believed better car parking would be attractive to visitors, the data indicated that visitors were actually more interested in better crossings, less traffic and cycle lanes.

By allowing people to see the results of the surveys, perceptions could be challenged and the right decisions made going forward. Take a look at the project via the button below.

Connecting with the whole community at scale

Using the Commonplace Design Feedback tool, Waltham Forest were able to break out each geographical area into a separate module to leave feedback and comments.

By giving local people the ability to comment on specific areas of interest, the feedback received was targeted and helped to understand the key areas where the proposals needed a rethink. Through the platform, key decision makers in the council were able to access accurate analytics around the information gathered. This gave them clear information to shape their strategy and help support change.

The amount of technical feedback from residents has been quite surprising! Details like the curb line and height of the curb. People really like to see positive change and that’s what we are providing
- Amy Priestley,  Waltham Forest

The engagement volume was staggering. Over 5% (15,000 residents) of the borough were engaged over an 18 month period. This included a large proportion of people aged under 40, a key demographic that the borough had found notoriously difficult to engage.

Being there for residents, short term and long term

Engagement metrics are great, but what really matters is the ability to respond in an informed manner to the public long term. Using Commonplace, Waltham Forest were able to adopt a genuinely open approach that included the ability to create newsletters and infographics all derived from the rich data they had gathered and to keep people aware of the changes.

"It's really important we get as many people involved as possible and asking people what they like and don't like and want changed. The best thing about Commonplace - it's so instant and interactive, so we can reach a massive audience. Before we would be printing off leaflets and posting hard copies, and now the consultation becomes three dimensional."
- Amy Priestley,  Waltham Forest

The successful engagement has meant that the Mini-Holland project was delivered, and has been beneficial to both residents and businesses. All of the data compiled through the Commonplace engagement led to the successful funding bid in March 2014. Since then the scheme has seen the introduction of:

The mini holland project across 3 London Boroughs, (Waltham Forest, Enfield and Kingston) is still ongoing, with programs set to finish in March 2021. That being said, these interventions that have already been made  have had a considerable impact upon the local community. 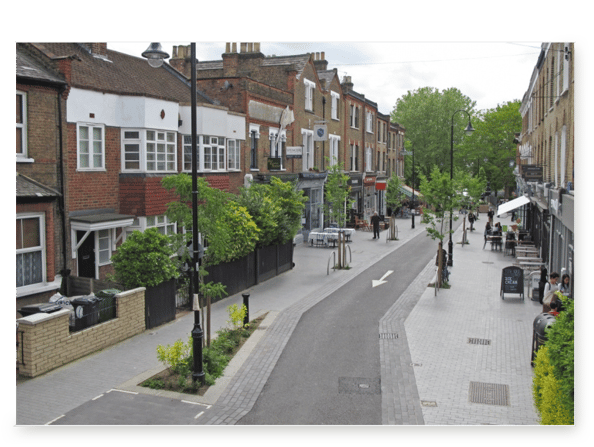 Research published in the Journal Transportation Research found that after on year, people living in the borough were on average walking and cycling for 41 minutes a week more than those living in comparable areas. Not only that, a Kings College report, paid for by Waltham Forest calculated that scheme had added a further 6 weeks to the life expectancy of children living in the borough.

Waltham Forest has been seen by many a leading example of how to involve the community in Active Travel projects. Following the extensive engagement process and the delivery of some of the major interventions, the scheme has won numerous awards. Notably, in 2016, LandorLinks awarded the programme the 'Best Innovation - Use of technology or technique' at the Cycle Planning awards  for how they used our platform to get the support of the community.

To learn more about the project, please visit the Waltham Forest' Mini Holland' Commonplace site and explore the conversation: https://miniholland.commonplace.is/

Arrange a personalised demo with one of our team: