COP26 is here and we’re going to bring you all the latest news and updates directly from Glasgow! Selected as part of the Tech For Our Planet scheme, we’ll be presenting our climate work… and more!

Make sure to check back for daily COP26 updates

We couldn’t be more excited to be a part of the UN Climate Conference (COP26) this week. One of the most important climate events in the world, we’ll be sharing the stage with some of the most influential climate influencers as well as some amazing up and coming tech companies who will be joining in on the fight against climate change.

As part of our ongoing effort to help create real and lasting environmental change, we're offering the chance to collaborate on Commonplace for 3 months, for free!

Commonplace was selected as one of two companies to represent ‘Engaging Communities’ technology at COP26's Tech For Our Planet challenge programme. Run as an initiative in partnership between the Cabinet Office and PUBLIC, Tech For Our Planet explores how digital-led solutions can make essential contributions to the global climate effort.

Our Co-Founder and CEO Mike Saunders will be presenting these ideas to an international audience in the COP26 Green Zone while also highlighting our work with the Rethink Glasgow climate campaign.

Partnered with OnePlanet, After The Pandemic have been using Commonplace to drive greener change in Glasgow with their Rethink Glasgow campaign. The heatmap has already received thousands of comments and they’re ready to make meaningful and lasting green changes in the city.

We are delighted to have been selected as a key partner in this challenge. Our approach is based on the concept that global change starts locally, so engaging communities to ensure their buy-in for change is essential.  - Mike Saunders

Today, we spent some time supporting our climate partners. We had the pleasure of attending OnePlanet's talk, 'Adapt Regenerate,' where a panel of expert speakers held a sobering discussion about the distribution of action that must be taken to save the planet and where those responsibilities truly lie.

You can watch the full recording right here or watch below!

We started our day off right, with our work with OnePlanet and After The Pandemic being featured on the BBC radio programme, People Fixing the World.

Six weeks ago, we asked the local citizens how they might #RethinkGlasgow. One heatmap and 1,200 comments later- major green changes are already being made to the city. You can find out all about it by catching up with our COP26 feature right here. 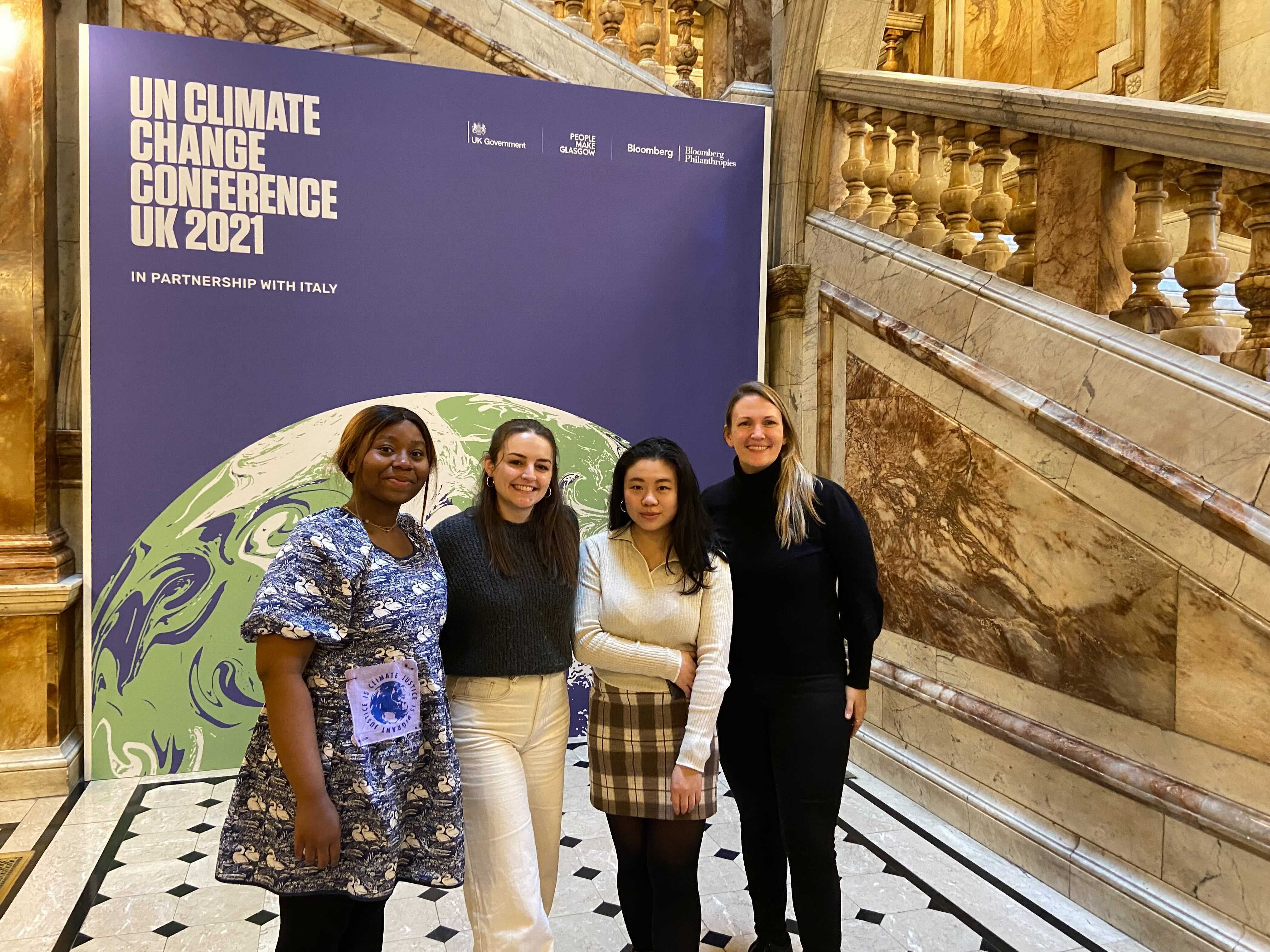 67% of decision-making roles about climate worldwide, are occupied by men. Many of these are white. - UN Women UK

The theme of COP26 today was gender and we had the privilege of seeing some of the amazing work from UN Women UK at their Climate Justice Forum. Lead by a powerful mix of women leaders and influential speakers, they showcased exactly how gender violence and climate change go hand in hand and the work that needs to be done to eradicate both.

Speaker Salina Salou of the Pan-African Alliance gave a powerful presentation on how the indigenous women of Kenya are currently battling to save the wetlands as well as how those in power need to be held accountable for what they are doing to the environment and their people.

Other speakers included Princess Esmerelda of Belgium, who highlighted how we need a 50/50 vision for men and women inside COP as well as a much more diverse group of voices leading the way for climate change. Young people are still being left out of many conversations and it's time to let them have their voices be heard.

Discover the amazing climate work from UN Women on their website.

Wednesday gave us the opportunity to visit a few of the COP26 fringe events around Glasgow and also take a look at the local climate work being showcased in the city.

We stopped by a very interesting panel by think tank Bright Blue, who talked in detail about the importance that 'smart energy' will have on fighting climate change in the future.

Andy Manning of Citizen's Advice pointed out how energy consumers are willing to change, they just need guidance with what to do and help when things goes wrong. This is where clear engagement becomes crucial- people can't make changes if they don't know the effects their choices have or even that they have a choice in the first place.

What we need is a strategy around consumer engagement… We need to get away from the discussion about technologies and focus on the outcomes. - Andy Manning

Dan Brook then discussed how half of what needs to be done is focussed entirely on direct conversation with energy customers. "It's not a very consumer-focussed industry," with "the majority of people not actually realising that their gas boiler is contributing to climate change." Breaking down those communication barriers and giving people the information they need will be essential in coming together to make greener choices.

After The Pandemic Keynote

On Wednesday afternoon, our Co-Founder and CEO Mike Saunders gave a keynote speech at After The Pandemic's fringe event at Strathclyde University.

Mike talked in detail about how major environmental change has to start locally. The project highlights just how keen people are to get involved with local environmental efforts with the thousands of comments left on the website that have helped empower real outcomes. For example, plans are already being made on what to do about the M8 that surrounds their city.

You can rewatch the full livestream right here or check out the Rethink Glasgow project here.

Thursday was a BIG day for Commonplace. Not only did we spend the morning at PUBLIC's stand in the Green Zone exhibition, but we also got to attend round table discussion hosted by ARUP, a firm of designers, planners, engineers, architects, consultants and technical specialists all focussing on builder a better and greener world.

Tech For Our Planet Showcase 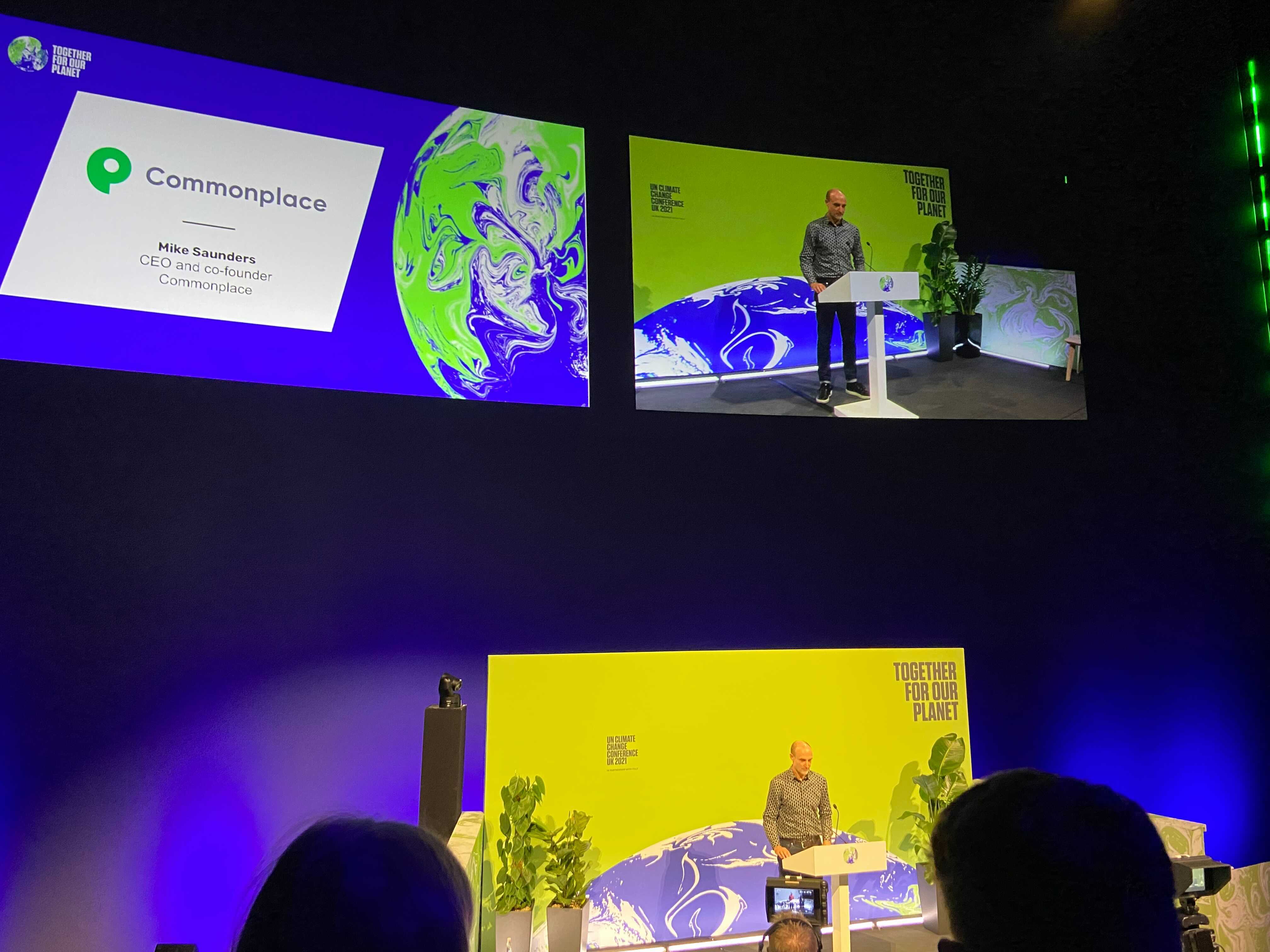 The evening brought the event we were most excited about. PUBLIC's full Tech For Our Planet showcase. This event featured ten climate-conscious startups who presented about how they were using technology in the fight against climate change- and we were one of them.

Our very own CEO and Co-Founder, Mike Saunders, took to the international stage and talked about how Commonplace is using it's technology to better connect people to the places the live, work and play as well as how powerful communities can be when they come together to tackle climate issues. This was highlighted in the Rethink Glasgow case study, which helped show just how enthusiastic people can be when given the opportunity to voice their ideas.

Climate change can be won from the bottom up as well as the top down. Commonplace is the collaborative glue that can make that happen- Mike Saunders

We also got to hear from some other amazing companies. From Olio's work in reusing and reducing food waste, to AgriSound and their fight to save the pollinating insect, to the ultimate winners of the event, Brainbox AI who showed how their technology can reduce building emissions by up to 40%, it was a fascinating evening and one that shone some much-needed hope on the UK climate conversation.

You can rewatch the entire showcase here

Want to keep on top of all the COP26 news? Check back here for daily updates and follow our live coverage on Twitter!

Commonplace Selected as 'Tech for our Planet' Partner for COP26