Developer, Thornsett, and the Purley Baptist Church wanted to present their plans for a proposed new development in the London Borough of Croydon. Using Commonplace, they launched a community engagement platform to inform local residents about the proposals, canvas their opinion and help bring them onside.

How can communities and developers work together to ensure buildings are developed that meet the needs of a whole community? The answer is through strategic, continuous engagement that gives residents the chance to express their opinions on the areas that matter most to them.

The proposed development comprised a mix of civic, community and religious spaces, cafes and shops, social support and teaching facilities, a 500 seat auditorium, a flexible exhibition space and a sports hall. In addition, the building would include 220 new apartment for up to 600 new residents in the area. The proposals were set to redevelop two brownfield sites in Purley Town centre and breathe new life into the area.

Despite theses fantastic new amenities being promised as part of the development, the height of the building was a very contentious issue amongst the local community. Prior to any consultation taking place, the prospective parliamentary candidate had even launched a petition against the project, amassing 4,000 signatures.

When opposition is fierce, it is critical to ensure that your planning strategy has taken community engagement seriously. Clearly communicating the benefits of the development during the planning consultation, and collaborating with the community is key.

See how Commonplace can help you with your planning consultations

Creating a forum for open dialogue

Working with Commonplace, Thornsett created a planning consultation site that allowed them to engage with residents and business owners, gather their feedback and co-create designs with the support of the community.

The proposals were published in a way that was clear and credible. This gave local residents a way to easily access the information they needed to help shape the plans, helping to increase trust amongst the community. Part of this was being open and honest with the facts around the height of the building and not disguising it in any way, which could have discredited the whole proposal.

By creating a forum for an open dialogue about the plans, we helped to move the conversation away from being combative to become more collaborative. You can take a look at the project via the button:

A view of the future

The masterplan was split into themes and schemes which respondents could comment on individually. This helped to identify which specific elements residents supported and which needed improvement. Using the Design Feedback tool, residents were able to clearly see a visualisation of what the area would look like before and after, to help bring the proposal to life.

Viewpoints were also added to the Community Heatmap to show where these views were taken from, and to ensure that every resident was able to get a clear vision of the proposed plans. 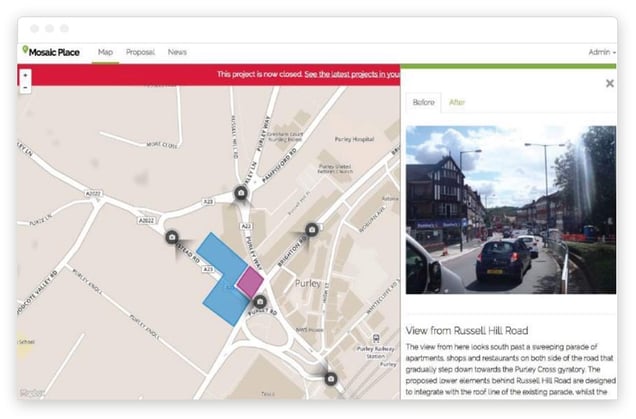 Following extensive consultation with the public, local stakeholders and other interested parties, the developers decided to make some fundamental changes to the appearance of the tower. Overall, the project site attracted 5,732 visitors and achieved 609 contributions to help shape the development proposals. The feedback challenged the architects to identify what people love about Purley and how that might become a part of a landmark building.

Residents gave feedback that asked for a tower that was not corporate or 'office like', that was elegant, green and lively, with the leafy nature of Purley as inspiration.

Achieving a successful planning resolution from Croydon Council required evidence of strong community engagement, which Thornsett had demonstrated. By using Commonplace to engage local residents, compile feedback and present revised proposals, Thornsett had clearly listenied to the community and they were granted a successful planning application.

“We decided to use Commonplace because we recognised that high quality, open engagement was the best way to reduce our planning risks. Commonplace delivered this very successfully”.
– Tony Pritchard, Development Manager, Thornsett

To learn more about the project, please visit the Mosaic Place Commonplace site and explore the conversation: https://purleycentre.commonplace.is/

Arrange a personalised demo with one of our team: