Miss out on our first webinar of the year? Catch up with what all our expert panelists had to say about how the ‘Planning for the Future’ government white paper has affected the industry right here.

Hear the whole thing for yourself by watching the live recording.

In August 2020, the government published a white paper, 'Planning For the Future’, which placed particular emphasis on how technology could boost public engagement in planning. 17 months later, we gathered a group of industry experts to discuss the changes (or rather lack thereof) that it made to the planning sector. These were:

While our first webinar of the year went off with a bang, we know that not everyone could make it. That’s why we’re here to give you the rundown of the main talking points and let you watch the live recording at your leisure.

Pam Alexander: Bringing the planning system into the 21st Century 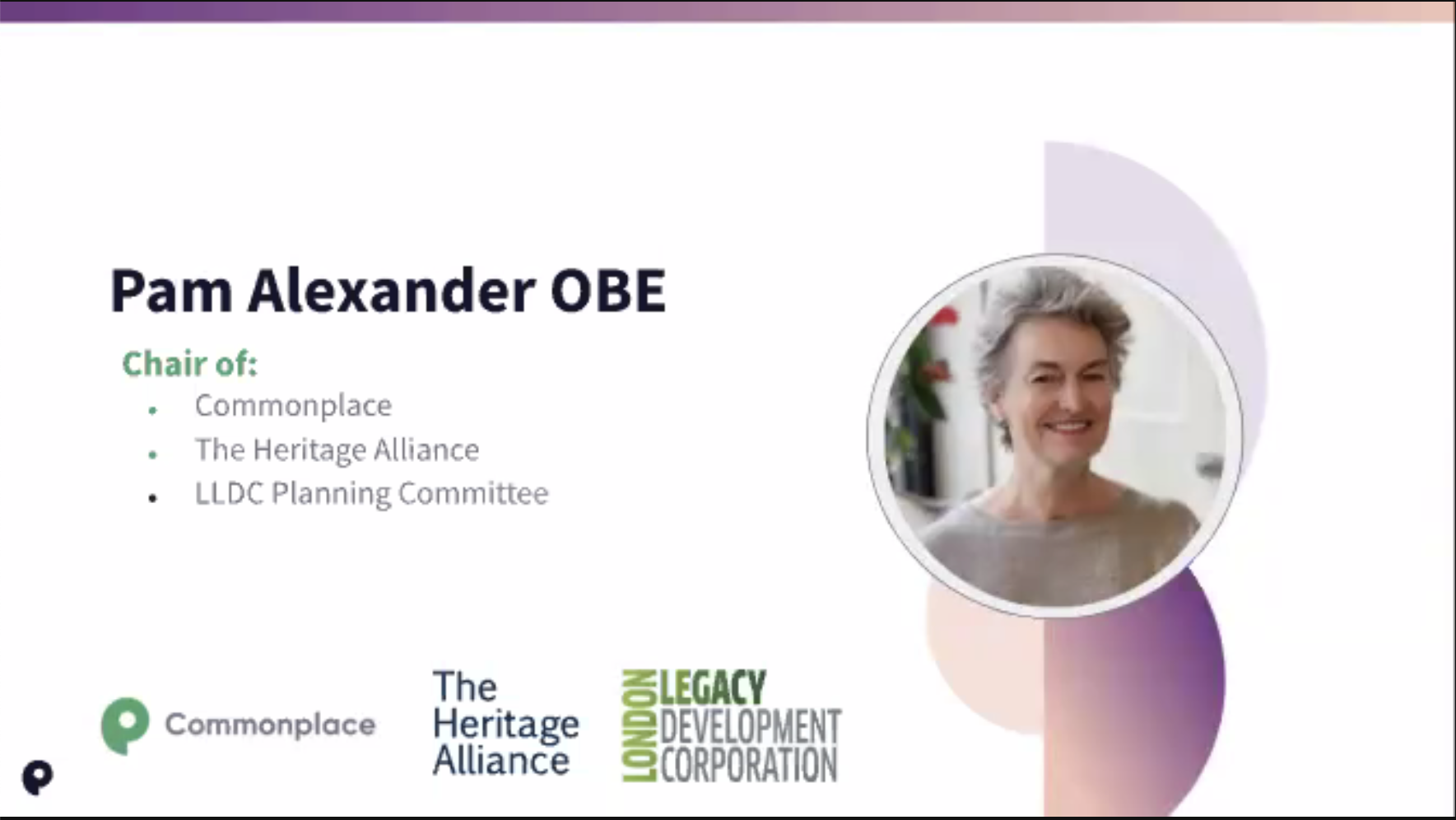 The Government’s white paper: ‘Planning for the Future’ published in August 2020 set out a bold proposal for sweeping planning system reform including, amongst other things:

“I’m not going to predict what will be in the widely anticipated Levelling Up and Planning White Paper, but we do know that the vision for real, empowered engagement, within a very broadly scoped digitally empowered system, at least, is still intact.”

To bring us into the 21st century, the Digital Land team in DLUCH has been developing digital planning policies and tools with a very practical approach: 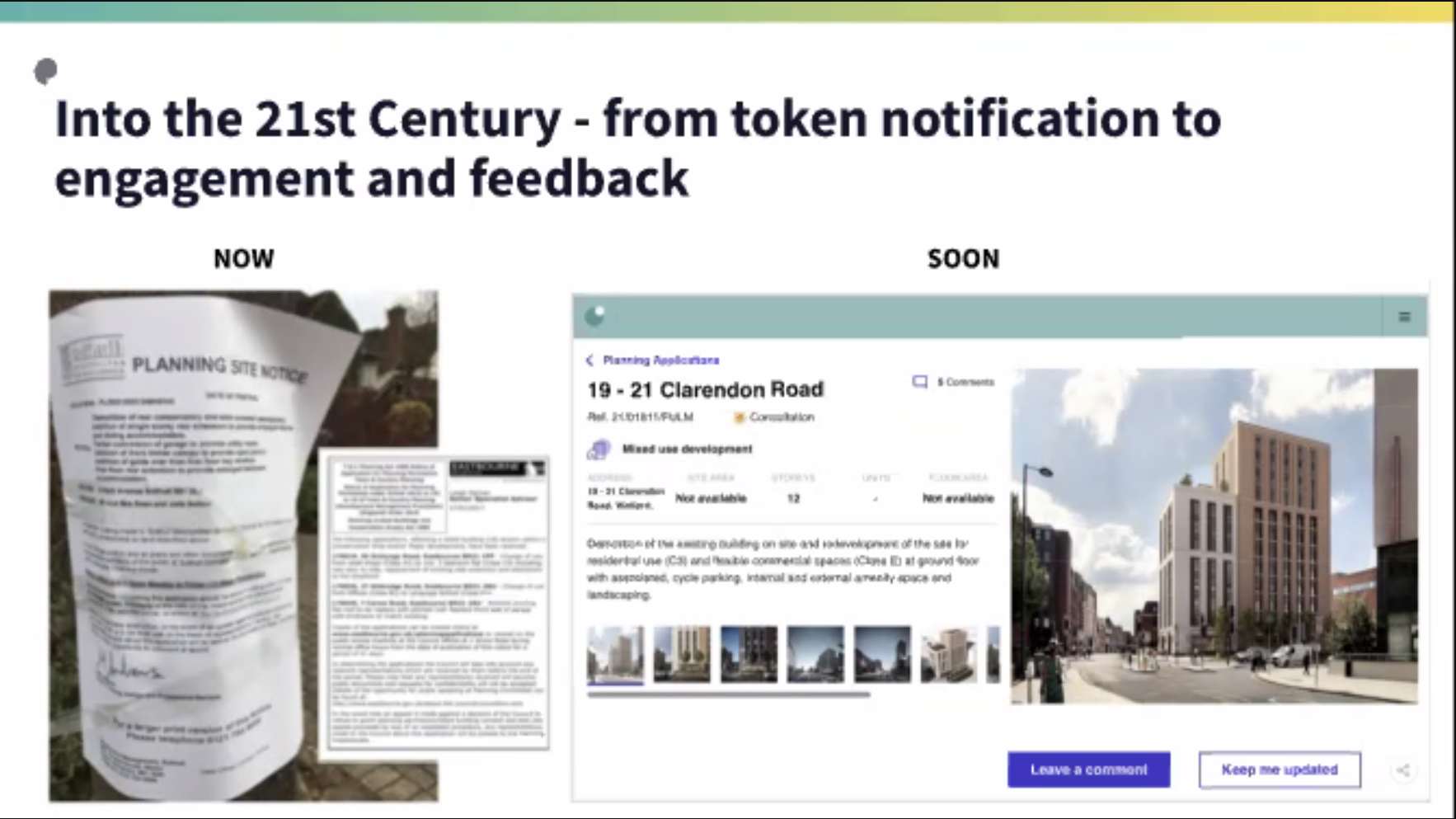 Commonplace published an Engaging for the Future report early last year which reiterated and developed key principles of the white paper, mainly that digital engagement has to be continuous and joined up throughout the planning cycle- a looped conversation with real feedback.

Since the white paper, progress has been made in the planning sector, progress Commonplace is passionate about. For example, we’re

Chris Hogwood: How we better involve people in planning 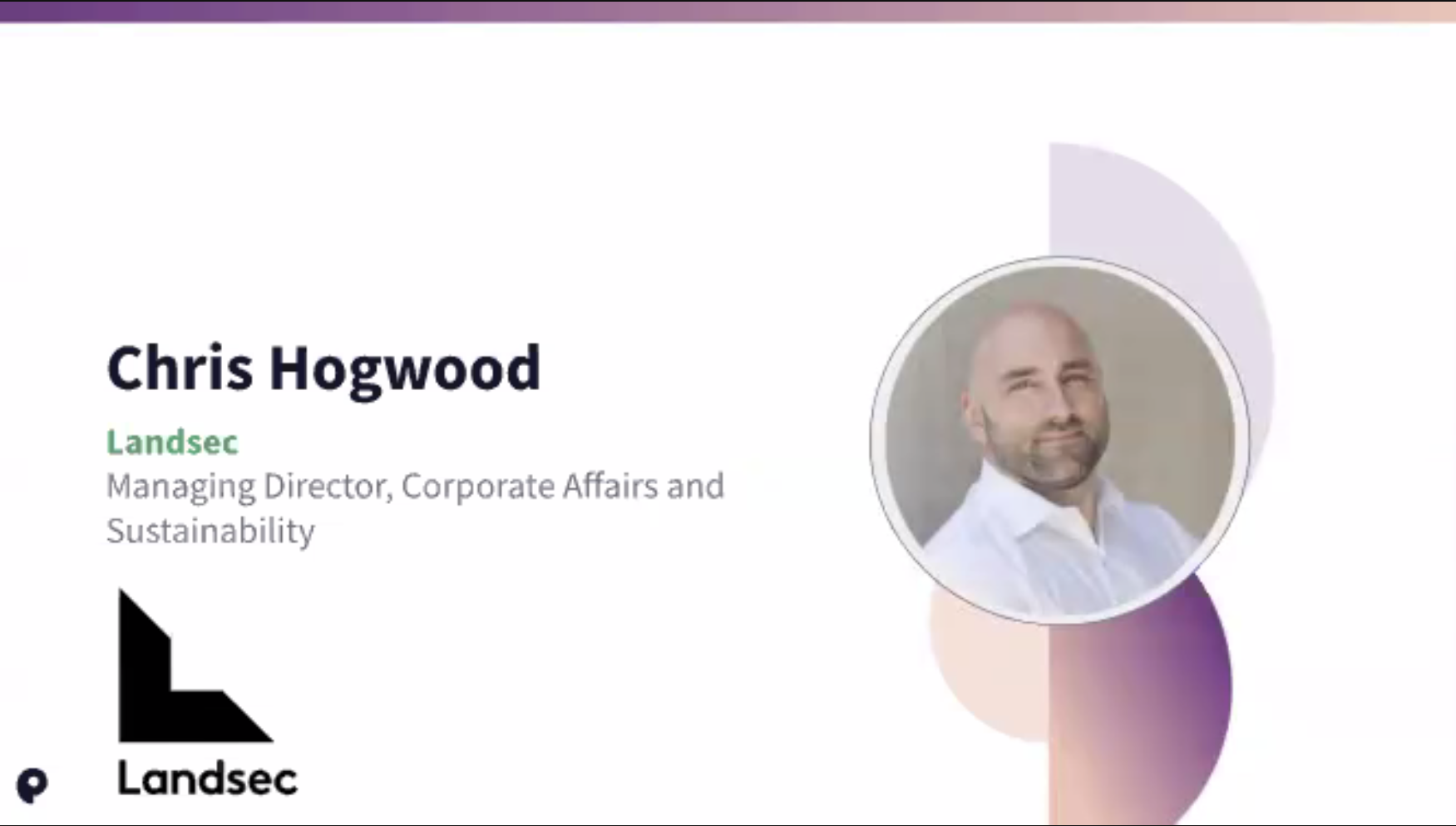 One of the best things about the government white paper is that it’s clearly trying to make it easier to get people involved in planning with digital playing a huge role in that.

“I think the white paper was good at signalling a direction but perhaps lacked a little bit of substance. Now I think one of the challenges we face in planning reform is how far and how fast the government is going to go on it or how much it is genuinely going to embrace a proper digital revolution. ”

One of the things I particularly liked as someone who did a lot of consultancy to developers, is the focus on involving people at the local plan stage. It’s really important to get that sense of dialogue going early on and then continue it through. While the white paper probably didn’t envision that continued dialogue, it did emphasise being that dialogue earlier into the process which is a big step forward.

“I’ve almost lost count of the number of times I’ve been in town halls, often in London and places outside of London, where you end up having to communicate back to the public and also to counsellors about what their local plan says.”

I think we’ll see much more momentum about planning over the coming months, because more people are thinking about place in general and Levelling Up means that there is a good runway for digital planning to expand. I think making it easier for people to engage with the planning system through digital is a massively positive thing, but I think it’s really important to remember that it won’t succeed if we fail to make planning relevant to the public. As with politics, the average person doesn’t care that much about planning until it’s turning into a car crash and going wrong in front of them.

So my view is that, particularly since joining Landsec inhouse, we need to work much harder to make people understand their ability to shape the places they live and why they should exercise that ability.

Tony Burton: An archaic system that needs to change 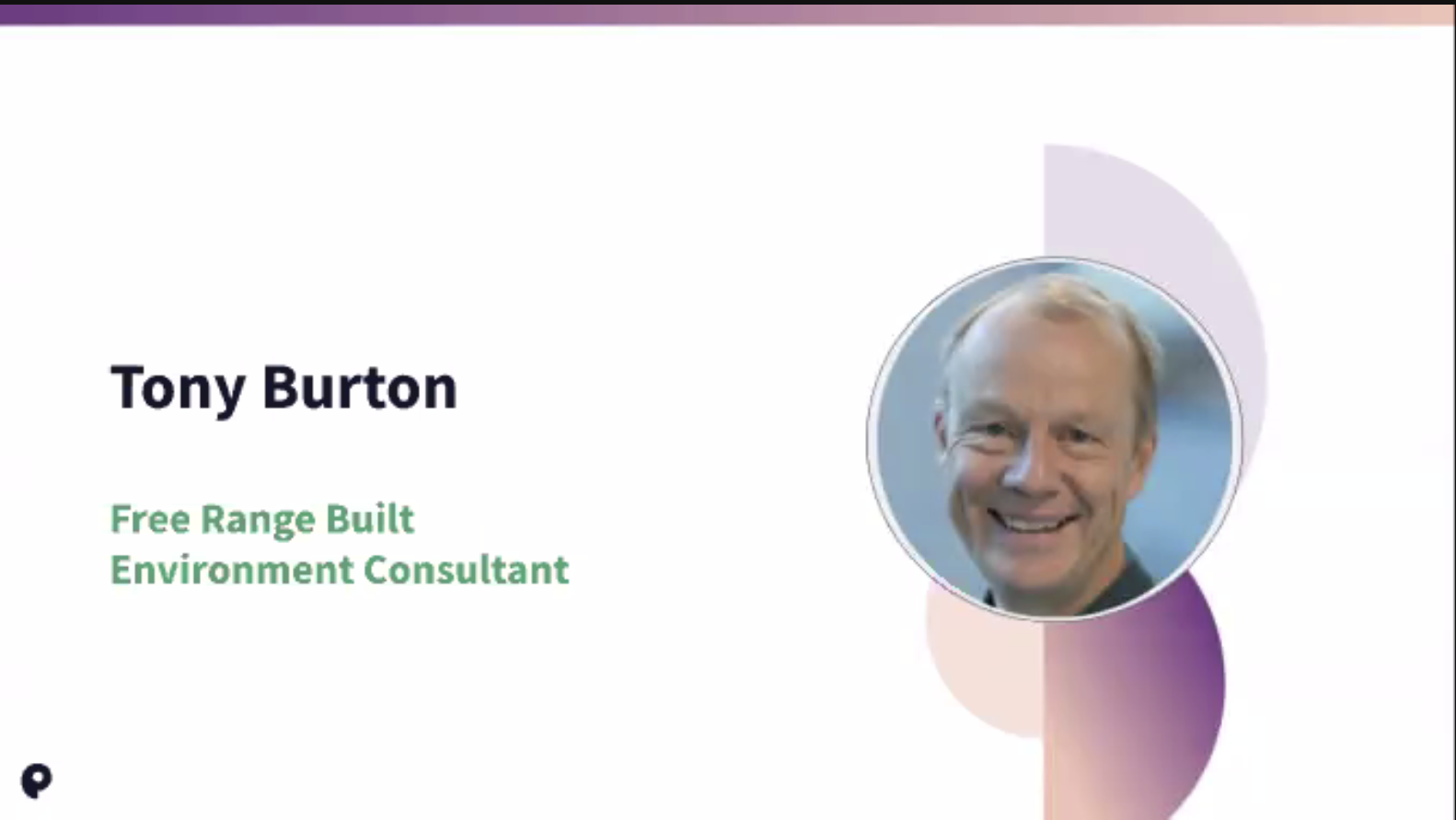 I’m approaching things from the perspective of someone who has spent much of the last 30 years supporting local community groups get involved in planning. To put it simply, our planning system is broken when it comes to community engagement. The processes are arcane, the professional culture is resistant, and the levels of trust in public bodies are in virtual freefall.  We are given too much one off consultation to meet a legal requirement, very little continuous engagement and next to no genuine collaboration and co-design.

There is so much to change that it’s hard even to know where to start.  At Neighbourhood Planners.London we have identified three priorities:

But there are big risks as well as opportunities in the dash for digital.  Digital tools and approaches can engage new and larger audiences and bring fresh insights but this must not be at the expense of other traditional approaches and of voices who do not engage digitally.

“Our work at mySociety on who benefits from civic technology showed that digital tools are being used by more people who are older, male, white, well educated, employed and politically engaged.  In other words – people like me.  And we all know what a mess these people have made of the world don’t we?!”

We only have a short window within which to tackle some of these fundamentals. All data and all digital tools reflect the values of those who control and design them.  Local authorities, developers and professionals are already in on the act, working on PropTech and creating the new digital world.  This new world needs instead to be designed with communities in mind.

Neighbourhood planning has demonstrated the value of providing relatively small amounts of funding and technical support. Just a few million pounds per year has given real meaning to this “community right to plan” that might otherwise have only been taken up by a few.  There are now over three times more neighbourhood plans than Local Plans and it has delivered a quiet revolution in community power over planning decisions.

When digital planning enables a new digital civics it takes on a new and much wider relevance that goes well beyond those currently involved in planning.  It starts to get to the heart of what people care about.  And it allows us to mobilise and campaign and build social movements to both inform and make decisions every day about our lives and neighbourhoods and not just when others decide to put in a planning application or when local politicians call an election.

Benjy Meyer: How Commonplace fits in 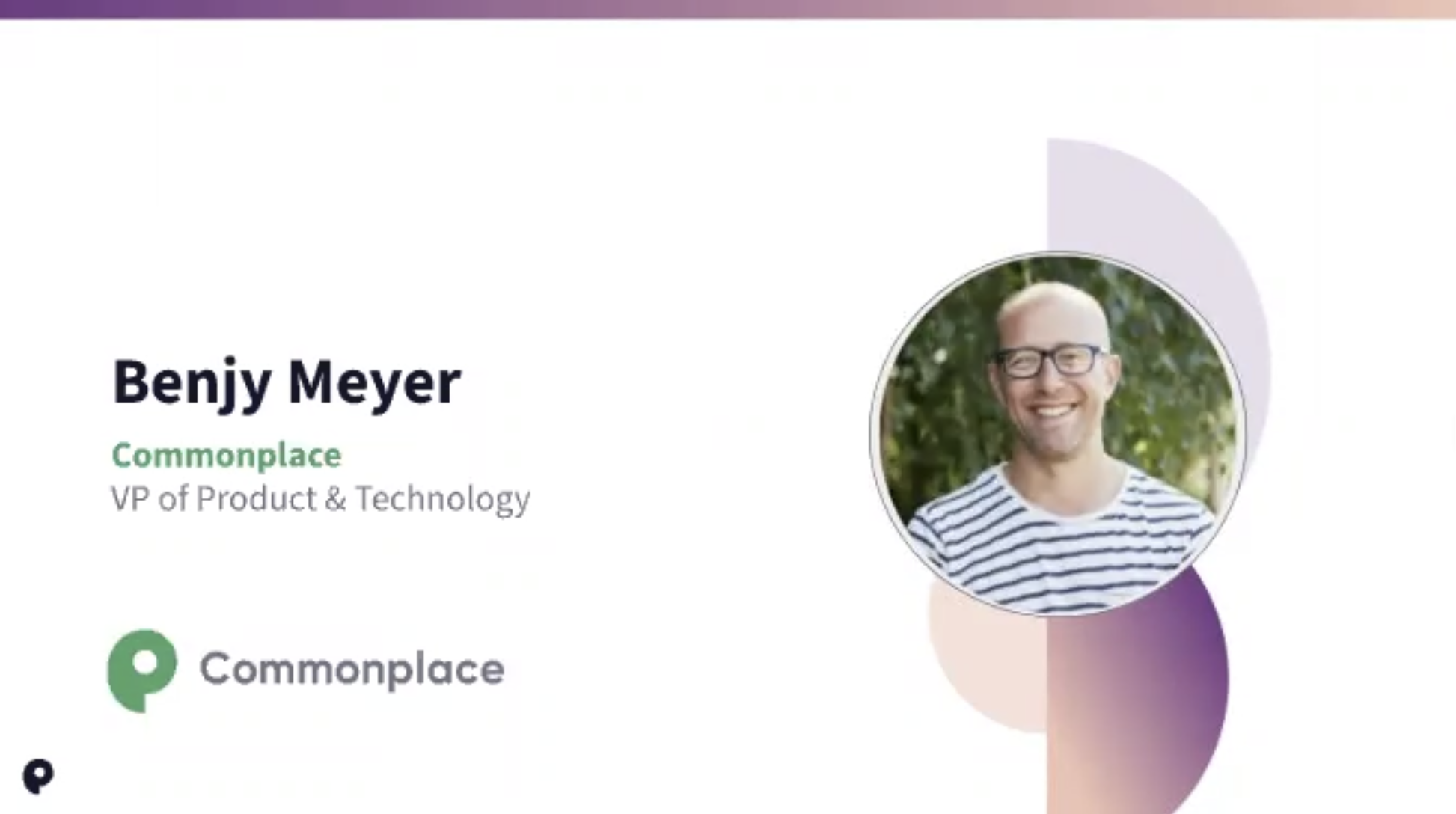 Digital innovation is ultimately the core of what we do here at Commonplace. Always looking at new ways to extend digital reach into the planning process and putting people at the heart of the planning conversation.

To start off, let’s take a look at our work with Watford Borough Council. In just 5 weeks we built a new planning applications platform for Watford, to transform public engagement on their major planning apps. As with all Commonplaces, we’re focused on transparency, sharing and upvoting other peoples’ comments- it’s the best way to drive collaboration.

Another new area for us is evolving our product to increasingly drive the local plan process. Chris talked about making the planning process more understandable which is exactly what Commonplace is striving to do right now. We start at an early stage strategic level, introducing the plan to the local community. We’ve worked with Liverpool, Cotswold, Hinckley and famously Catford, who consulted on 39 different phases of their local plan.

“When it comes to masterplanning, our community heatmap is really well positioned. We work on masterplanning large and small, extensively across the public & private sector. Helping developers gain support for what will ultimately become a statutory consultation. Similarly on infrastructure projects, like smart motorways, solar farms.”

Supporting communities to drive the development they need is extremely exciting for us. For example, Surrey CC chose Commonplace to do this and it was amazingly successful: 66k respondents actively participated in a process of collaboratively crowd-sourcing, refining and prioritising projects on Commonplace.

We supported the strategic design of their grant scheme. One of the outstanding successes was the way people up-vote ideas on Commonplace, which encouraged self promotion, new connections and ultimately prioritising the best projects.

That was the rundown of our webinar panelists! As always, you can rewatch the whole thing using the link below or sign up for our upcoming webinars right here.

The future of planning- An interview with Oliver Norman