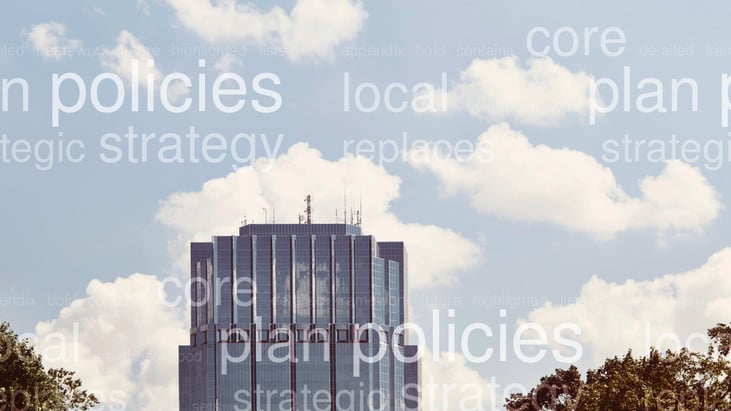 The current rate of new home starts in London is estimated to need to double from about 24,000 to 50,000 to keep up with demand caused by demographic trends - and that’s before delving into affordability considerations. Making this scale of development acceptable to Londoners will be a key to the new Administration achieving its ambitions, and to do that, public engagement will need to reach a very different audience from “the usual suspects”. Digital tools will be critical in ensuring a wide reach, open debate and the levels of transparency needed to establish trust.

All the candidates in this week’s election emphasise housing as a key measure of their success if they win the key to City Hall. There is widespread agreement that places will need to be found for a whole lot of new houses. Beyond this agreement though, paths diverge. For and against building on the Green Belt. High rise or low rise. High density or medium density. For Londoners or for all comers. Any side of these couplets has supporters and detractors in London’s communities, driven by deep-held beliefs, needs or a sense of individual and communal self-preservation.

To achieve progress, especially as rapid as the politicians commit to, they will need to bring Londoners on board with them. The Royal Town Planning Institute identified public engagement as one of the key obstacles to large scale residential development. Here is the full list from their 2013 publication (1) - almost half of the list (italicised) relates to public engagement:

Let’s assume that the brave commitments indicate that leadership has discovered its inner boldness. That still leaves a sceptical public to tackle, one that often feels it has development foisted upon it and struggles to reconcile how the growth of London will help tackle their needs rather than those of the newcomers.

Sadiq Khan has published a “Good Development Standard” which includes a direct reference to public engagement - “it will ensure that local people are properly consulted on any new developments in their area”, he is quoted as saying (2).

Zac Goldsmith’s consultation focus has been design - according to the Evening Standard, he has pledged to: “Consult Londoners on what style of new homes they want to see built” and “Help communities draw up their own local design guide for developers” (3). Both leading candidates recognise the vital role of communications - and much of the effort needs to be focused on the pre-planning stage. It’s at this stage that you can understand what communities recommend and what they see as a reasonable trade-off between new development and improving local amenities. Understanding the tradeoffs that communities want, and demonstrating how the designs that emerge reflect them, is one of the core challenges of acceptance.

There will always be implacable people who will accept no trade off as being worth the change to familiar environs. The challenge for public engagement is to get beyond these populations to a wider constituency. Paradoxically, many of those who stand to gain from large housing developments are the least engaged in traditional community and amenity politics. They will be young-ish; transient - out of choice or necessity; busy - both professionally and socially; and tuned to social media as a primary source of information and news that is targeted at their interest and self-interest. Reaching them means moving beyond the traditional forms of public engagement. It means going digital - and doing so from the outset, with conviction, strategically and comprehensively.

Data on the effectiveness of public engagement by different means is scarce, not least because non-traditional channels are new. We are fortunate that one of our clients recorded the ages of people responding to traditional public engagement (meetings and paper submissions). We can compare this data to the age profile of Commonplace users for the same plan: 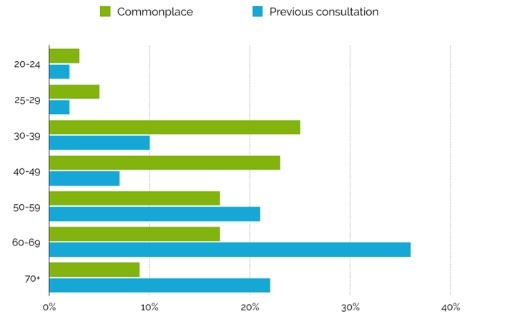 Between ages 25 and 50, Commonplace dominates, pointing at the huge potential of digital tools to transform the engagement landscapes and with it deliver a more balanced, nuanced and informed set of views on Londoners’ needs.

Community and legacy in Stratford