Shaping the future of Cairngorms National Park with community engagement

How has Cairngorms National Park Authority engaged the local community in protecting and improving areas of the park? Read on to find out about their community engagement strategy.

Let’s take a look at both websites and see how the Park Authority’s engagement strategy has helped to create a community-lead Park Plan and shaped the future of active travel in the area.

The Cairngorms Views Commonplace was launched in June 2021 with the goal of gathering community views to shape their newest National Park Partnership Plan, a process that takes place every five years and guides the activities of all public bodies working in the Cairngorms.

As the UK’s largest national park, covering 6% of Scotland’s land mass and being home to over 18,000 people, the Park Authority wanted an engagement that could reach as many people that live, work and visit the area as possible. Everything from the impact of the pandemic to Scotland's climate change commitments, to new housing projects, will have a great impact on the area over the next five years. The Park Authority see gathering the views of the local population (as well as visitors to the area) on these matters as vital so they can not only establish what matters most to key stakeholders in the area but also understand how changes to the National Park could improve their quality of life.

The first thing the Park Authority sought to do was widen their engagement strategy as, in the previous 2017-2022 Partnership Plan, they engaged just over 300 people. While not a small amount, they found that a number of specific stakeholder groups had been underrepresented. The goal of the 2022 consultation was to use a hybrid approach to engagement - digital and in-person - to reach more people who would not normally contribute. Thanks to this strategy, they received over 2,600 responses in this engagement project, a large majority through the Commonplace website, which helped to create a Partnership Plan with a real sense of community cohesion and support.

Let’s explore how this happened.

The first step in engagement is local awareness. Cairngorms launched the engagement with an informal online consultation to get the website noticed and stir a conversation with the community. This was then followed by the launch of an interactive Heatmap where respondents could drop a pin on an exact location and answer preset questions about their views on that area. These questions were drafted by Commonplace and the Park Authority to ensure that they would receive relevant answers that could be incorporated into the new draft plan.

Once the draft plan was created from this feedback, the formal consultation period began. Separate proposals were created for each theme of the plan (Nature, People and Place). The community could easily leave feedback on any or all of these themes, and this feedback was used to inform the next stage.

“The Heatmap was a brilliant way of getting people to tell us what they thought with as broad a brush as possible… I think being able to put a pin in the map and just write what you thought broke down a communication barrier for a lot of people.” - Olly Davies, Head of Communications at the Cairngorms National Park Authority.

Commonplace’s built-in News Feed was also frequently used to spotlight the specifics of each theme (i.e local communities, net-zero goals, local businesses) as well as to share views that people were agreeing with. The News Feed gathered over 800 subscribers - nearly three times the total response to the previous consultation. It also resulted in people providing multiple comments and helped to drive yet more people to become involved.

Due to the rural nature of the Cairngorms, a blended approach of offline and online engagement was the best way to keep as much of the community informed as possible. Although the pandemic made the digital sphere quite prominent, it did not stop physical engagement strategies from being utilised throughout the consultation. A mailing was organised for every household in the National Park area to spread awareness alongside the Commonplace, with a QR code designed to help advertise the consultation locally. This was on top of the online channels such as the previously mentioned News Feed, email and their ongoing social media presence which shared the specifics of what the community wanted from the plan. 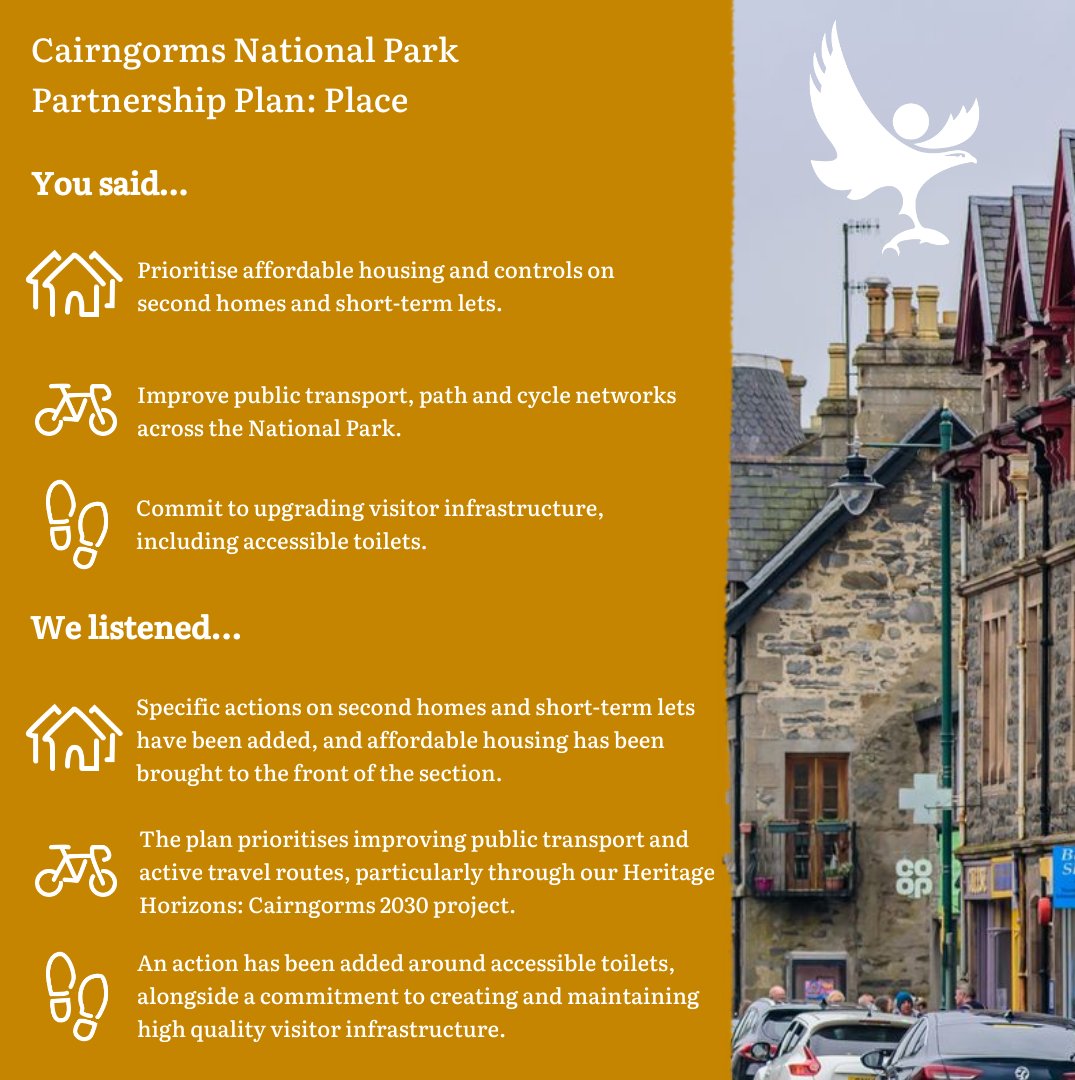 An infographic summarising feedback the Park Authority received during the formal phase of the consultation and what changes were made as a result.

Thanks to the community input from this project, the Park Plan was launched in August 2022.

That same month, the Park Authority organised another mailing to all the households in the National Park which covered the main views gathered by the consultation and how they helped shape the final plan. This “closing the loop” - telling the community how they had helped shape the future plan and how they would be kept informed in future - was something the community had asked for. Feedback from the previous plan showed that many people felt as if they were only being asked to contribute every five years and that they couldn’t see how they had had any impact.

One of the main goals of the programme is to encourage people out of their cars by improving public transport and maintaining the paths for cycling, walking and wheelchair users within the National Park. To do this, another Commonplace project site has been launched to gather the views of the community and understand people’s current experiences of active travel around the National Park.

“The idea of the project is to put the power to tackle the nature and climate crisis in the hands of the people who live, visit and work in the National Park.” - Olly Davies, Head of Communications at the Cairngorms National Park Authority.

Power in the people

One way the Park Authority are putting this project in the hands of local people is by giving them the right information. This involves using the correct terminology and making sure that the project website is understandable and not bogged down with hard-to-understand information or terms. It’s also made clear how to tackle it on a practical front as a community member.

This project will also deliver on some of the issues raised by the Cairngorms Views project website, helping to showcase the ongoing work of the Park Authority alongside local people.

Utilising the Commonplace website, citizens can leave their views in four different ways:

Heatmap: Once again, the Park Authority is utilising a community Heatmap so people can drop a pin and explain their experience of walking, cycling and using a wheelchair in the National Park and explain how they believe these routes could be made more accessible.

Active Travel Survey: Data collected from these two ten-minute surveys will be used to determine what the priorities are for active travel in the National Park and what can be done about any existing issues.

E-Bike Survey: Part of the programme is to create a network of e-bikes that residents and visitors can use for everyday journeys. To create the best plan, this survey focuses on asking how people would use e-bikes should they become available as well as their existing thoughts or gripes about them.

Drop-in sessions: A hybrid engagement strategy is also playing a sizeable role here, with multiple drop-in sessions scheduled where members of the community can visit the team and discuss their active travel needs. Some are open to everyone while some were created to gather info from certain demographics. For example, in August, there was a drop-in session specifically for audiences with a disability or over 65. 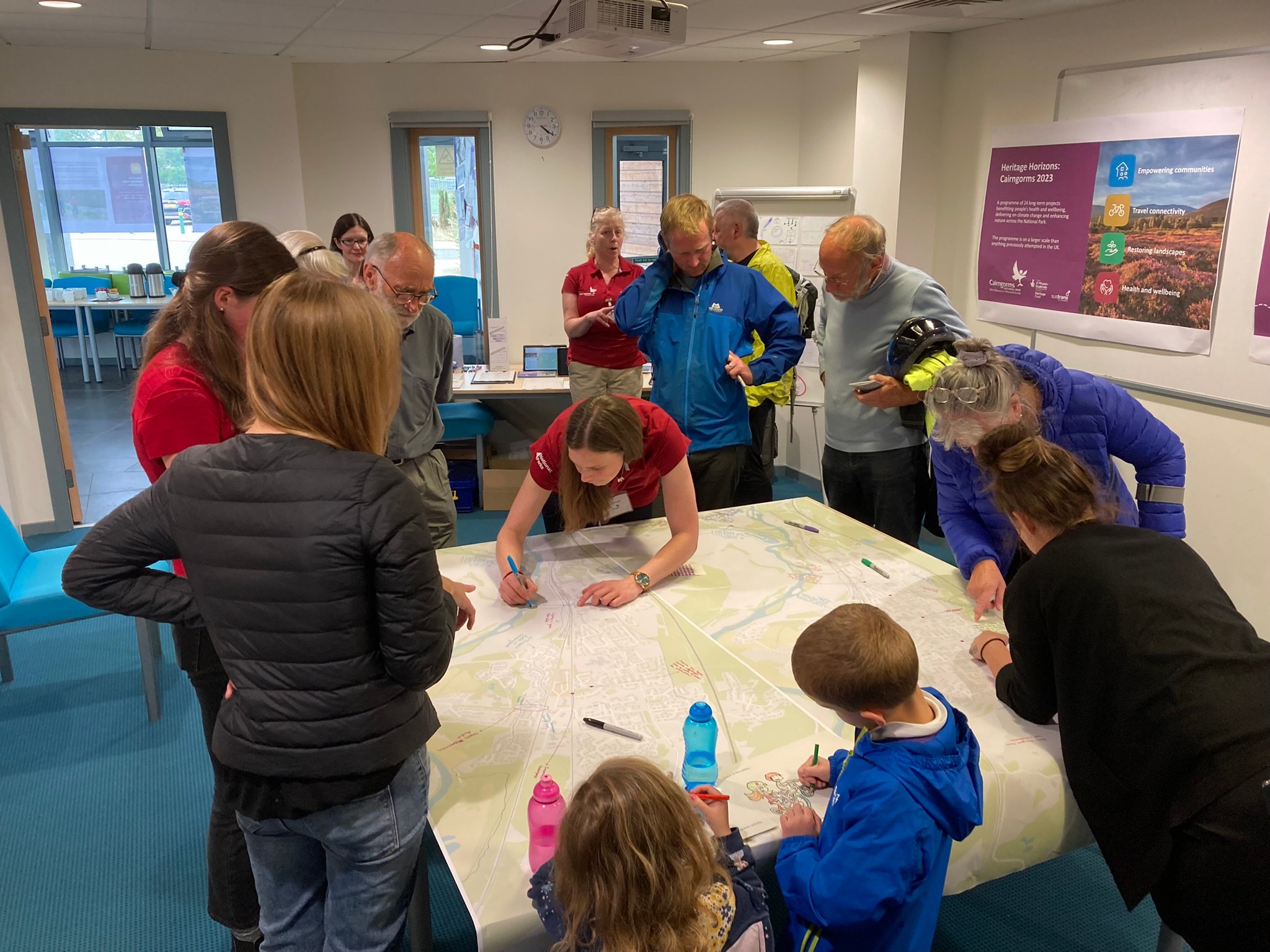 The coming months will also see the website expanding to cover other areas of the project, including specific consultations on health and wellbeing and special landscape qualities. Another goal is to harness the power of nature in the National Park to have a positive impact on people’s health. Structural changes and improvements could also lead to a cultural change around the project being able to demonstrate the value of nature as a genuine intervention within the public health space.

Make sure to keep up with Cairngorms Park Authority’s progress here!

Or, if you've been inspired by their work for your own community engagement, make sure to book a free chat with our team using the link below.